We run with scissors and bulls.

WE CAN  BELIEVE IT’S NOT BUTTER. WE MAKE ONIONS CRY. BIGFOOT CLAIMS HE SAW US. AND WHEN WE CROSS THE ROAD, NO ONE QUESTIONS OUR MOTIVES. LET’S FACE IT: THE MUFFIN MAN KNOWS US.

In 2002 author/writer Tom Llewellyn and artist/designer Lance Kagey began creating handcrank, letterpress broadsides fusing words and imagery to entice the community into conversation. Beautiful Angle combines guerilla art and timeless craft. For more than eighteen years, Beautiful Angle’s letterpress posters have adorned the buildings and lampposts of Tacoma each month. Using a mixture of hand-carved plates, digital imagery, and wood and lead type, the resulting posters address themes of faith, politics, and place, all from a uniquely Tacoma-centric point of view.


Beautiful Angle is of, by and for the citizens of Tacoma, Washington.

EVERY POLE IS YOURS TO LIE UPON, EVERY CONCRETE WALL IS WAITING FOR YOUR WORDS, YOUR GRINNING WORDS OF TRUTH.

Beautiful Angle was created out of a desire to remove the obstacles between ideas and end result. By making public property their canvas, Beautiful Angle has pushed art and poetry into the marketplaces and neighborhoods of their city. A primary goal of Beautiful Angle is to build community creating a dialog with the those connected to arts and culture in our city. 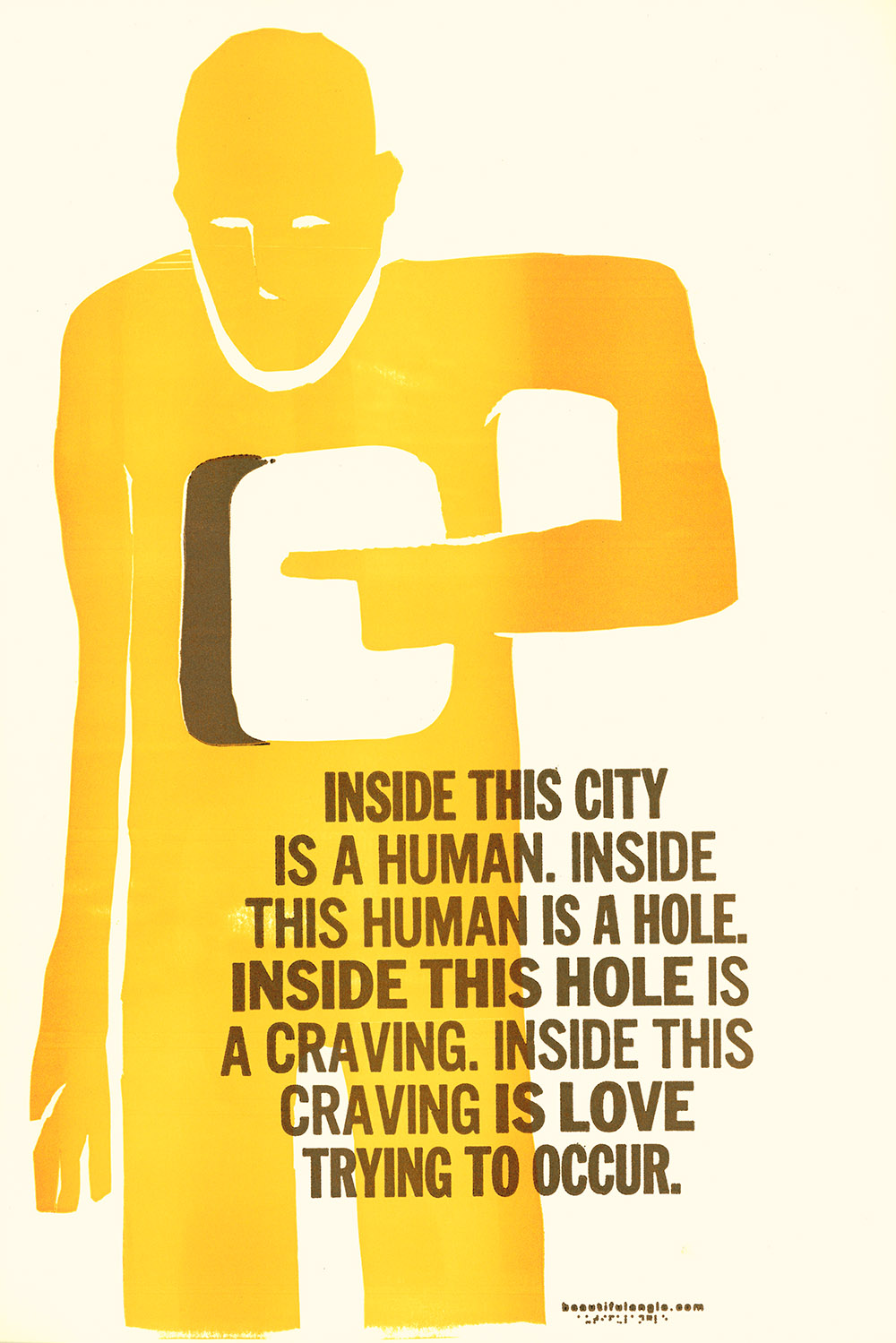 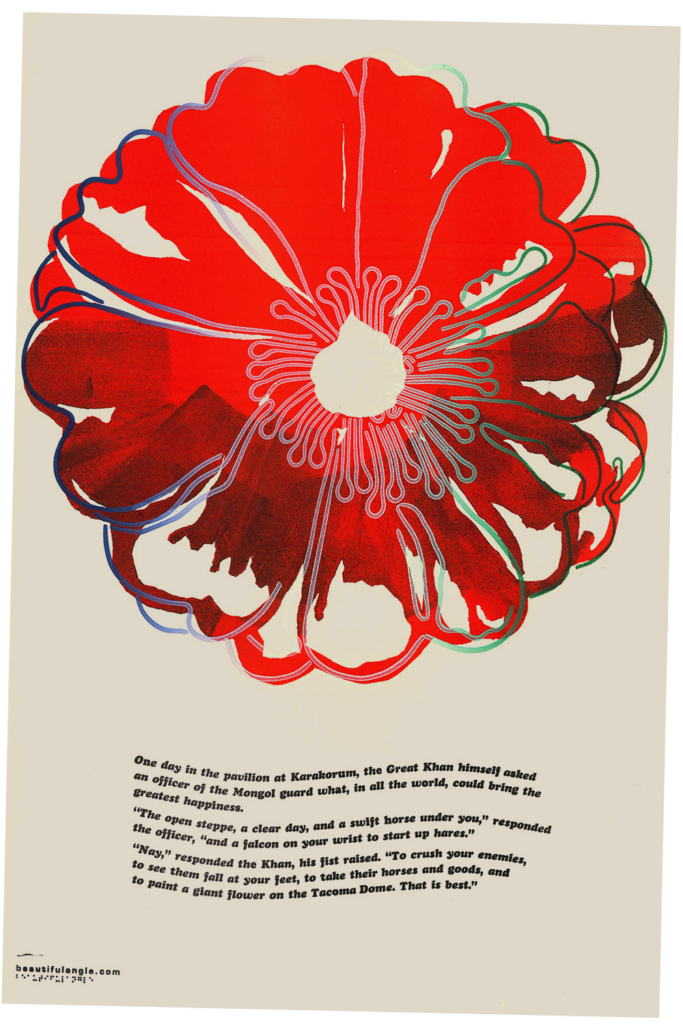 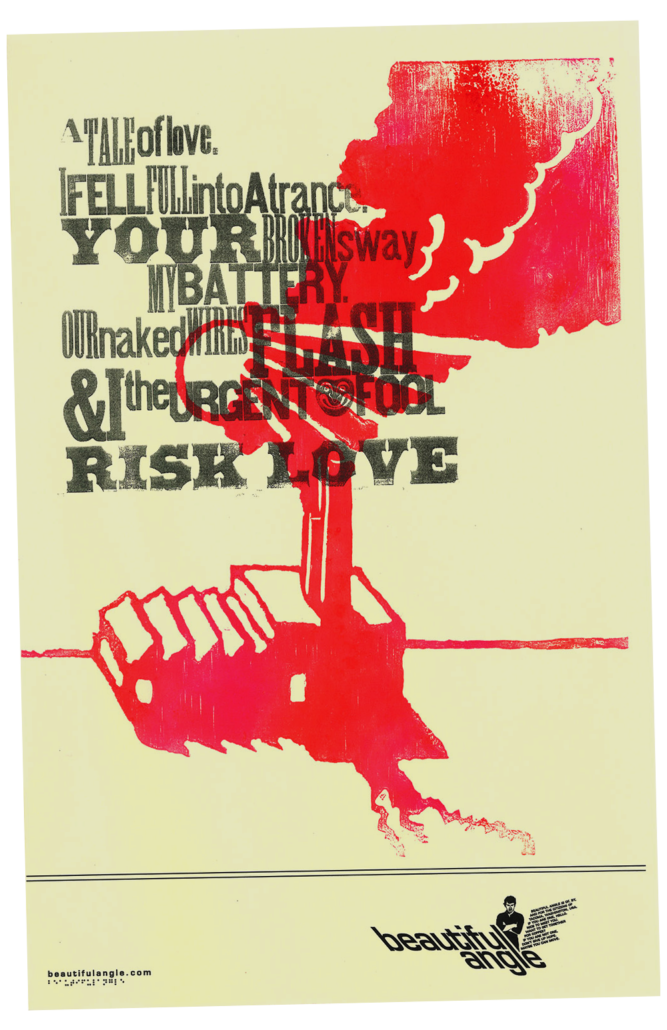 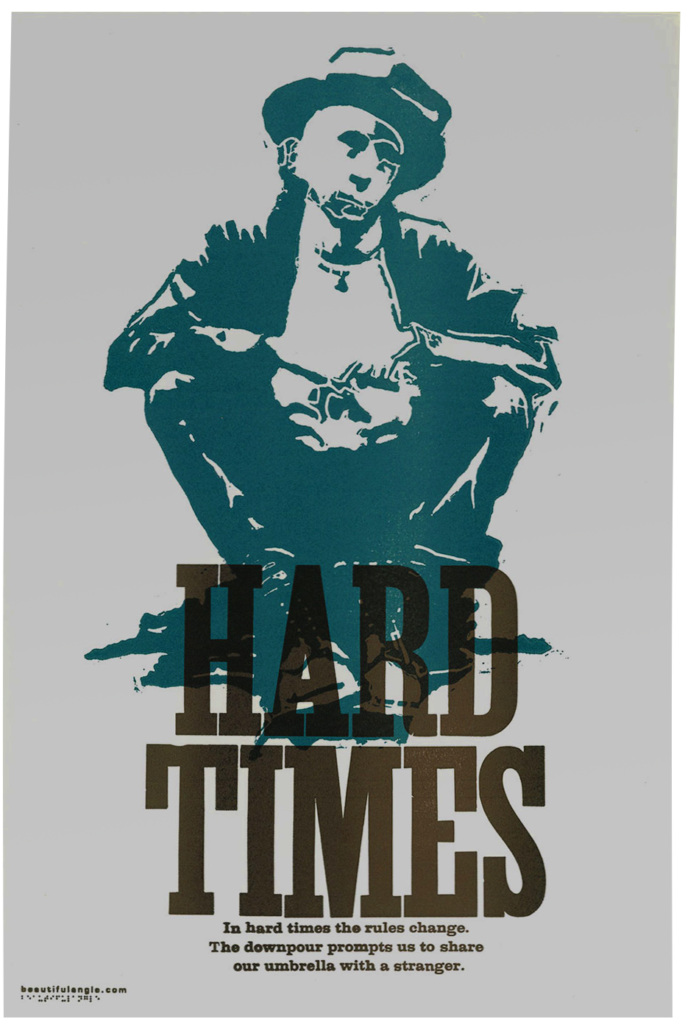 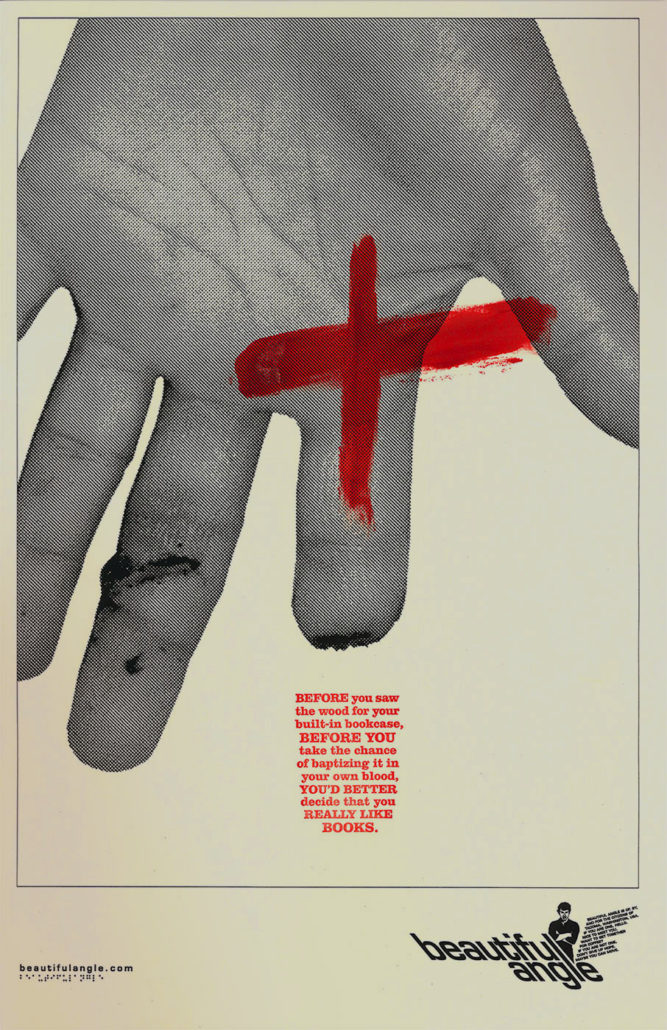 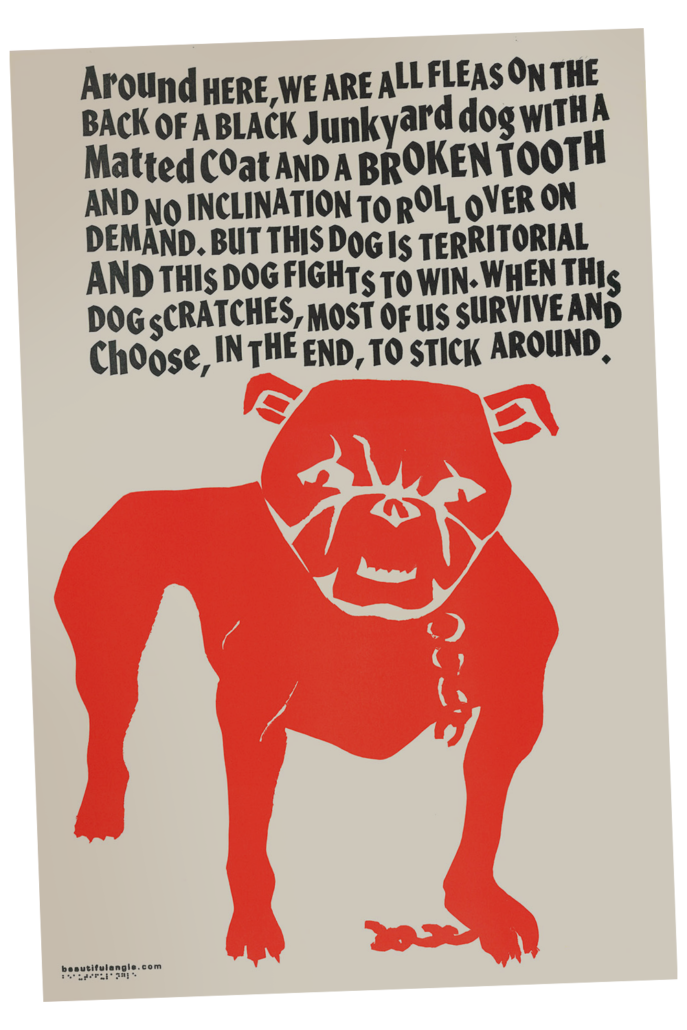 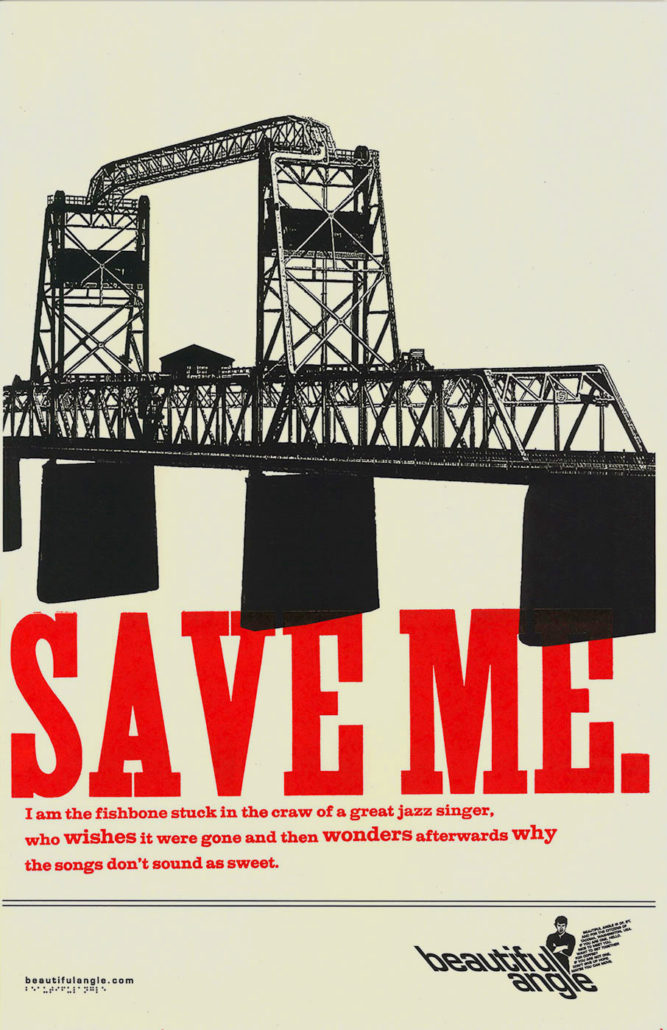 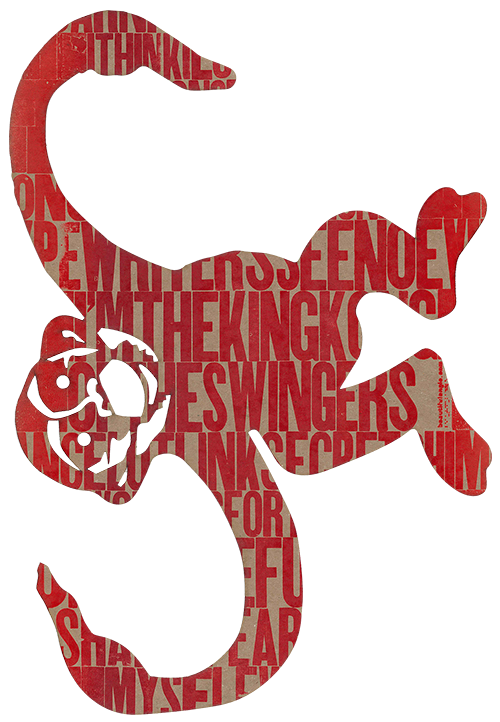 Beautiful Angle’s first poster, Swirl, was distributed on October 31, 2002, the anniversary of the posting of The Ninety-Five Theses by Martin Luther. Beautiful Angle takes a very non-traditional approach to this centuries-old craft. A typical press run is 120 posters, of which 80 are posted around the downtown area of Tacoma, and the remainder are sold. Beautiful Angle has a “strange, contradictory relationship with the city”; even though the posters are posted perhaps illegally, the group has won numerous community awards including the Chamber of Commerce 2016 public places award for community building. Beautiful Angle has also worked with other artists such as Mary Mann, Ryan Meline, poet Bill Kupinse and legendary designer Art Chantry. A nearly complete collection of posters is always on display at King’s Books in Tacoma.